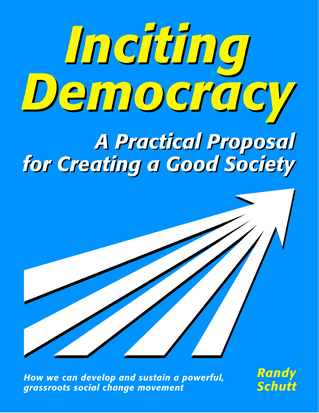 The whole undertaking just does not seem possible. The goal is so ambitious. The ideas have to be wrong. It has to be too simple or too naive or missing something. How do you know this will work?

Honestly, I do not know if it will work. However, just because something has never occurred before does not mean it can never happen. Slavery was common 150 years ago, but is now mostly gone. Capital punishment is considered barbaric in most of the world and only a few countries still allow it (unfortunately, one being the United States). The computers, telecommunication satellites, and jet aircraft we take for granted now were just the imaginings of a handful of crazy dreamers a few decades ago.

In our current society, it is especially difficult to imagine any genuine positive change. Television news assaults us every day with a stupefying brew of dreadful images of disasters and tragedies, inane reports on trivial events, and titillating but useless gossip. Politicians regularly drown us with deceptive blather and disingenuous promises that they seldom keep. Advertising constantly bombards us with splashy images and clever appeals that tempt us to purchase worthless products. At the same time, most things of true value to human beings are ignored, mocked, or repackaged into banal commodities. So our whole culture repeatedly and pervasively informs us that significant positive change is impossible. Hopelessness permeates our society like a thick cloud of poisonous gas, numbing our senses and killing our spirits. The heavy weight of despair keeps us down.

Every noble work is at first impossible. — Thomas Carlyle

Moreover, cynics incessantly cite innate human frailties like greed and arrogance, and they recount the many previous failed efforts for positive change. But these are really more excuses than reasons for failure. For every way in which humans are warped or weak, there is a way in which we are noble and strong. For every promising initiative that has failed, another soared beyond anyone’s expectations.

I believe there are only five main obstacles to creating a good society and none of them is insurmountable. We can overcome each by applying skilled effort methodically and patiently over time. It may seem impossible — but I believe our hopeless feelings indicate only how difficult it has been in the past for us to succeed and how painful it has been for us to fail repeatedly.

The whole problem with the world is that fools and fanatics are always so certain of themselves, and wiser people so full of doubts. — Bertrand Russell

Still, I may be wrong. It may be impossible to create a good society, or this particular way of getting there may be the wrong path.

I am heartened by the responses of the many experienced activists who critically evaluated the draft of this book. Most expressed general skepticism that it would work, but almost none offered specific reasons why it could not work. Almost all of them encouraged me to continue working on this project.

I do not know if this effort will work or not, but I believe it is the best chance we have.

2. Your Assumptions May Be Wrong…

You make a large number of estimates and projections about how things might evolve. Are you sure these are all reasonable?

Writing this book forced me to specify concretely how everything might work. Consequently, I am aware of the considerable number of assumptions and assertions I make and how large some of them are. Each is subject to challenge and criticism. In fact, I can formulate powerful arguments against almost every assumption and assertion that I make. Then again, I also have strong and persuasive arguments in support of each of them.

Only those who attempt the absurd can achieve the impossible. — Graffiti

Overall, after carefully evaluating each one, I am convinced these assumptions are sensible, reasonable, and compelling. Still, they may be wrong. As the Vernal Project proceeds, we can check these assumptions to see how reliable they are and revise the Project accordingly.

3. Will this Really Work?

If your assumptions are faulty, this project will probably not work out. What happens if the Vernal Education Project never happens?

If the Project failed to take off, it might be because my ideas were faulty — my understanding too naive, my projections for the future too utopian, or my plans just plain misdirected. If so, then I would need to reconsider all my assumptions and reasoning and then start over.

A cynic is an idealist turned inside out. — Graffiti

It may be that the analysis is correct, but that the forces arrayed against positive change are just too strong. Then the Project would ultimately fail. This would be disheartening. Still, I believe the effort would have been worthwhile. It is far better to strive for a grand goal and fail than never to have striven at all.

If we proceed yet fail, our efforts will not go to waste: whatever curriculum we develop, workshops we facilitate, and positive change we are able to bring about will be valuable and will contribute to progressive transformation. I believe it is worth making the attempt.

In great attempts, it is glorious even to fail. — Cassius

The probability that we may fail in the struggle ought not to deter us from the support of a cause we believe to be just. — Abraham Lincoln

Defeat is not the worst of failures. Not to have tried is the true failure. — George E. Woodberry